The interview with the industrial designer and architect Ron Arad took place in the plane from Turin to London on December 18th, 2013.

The Design Museum in Holon (Tel Aviv) opened 3 years ago – it is the only public building in the country without a Mezuzah because there is no door and you don’t know when you are in or when you are out.  This is the only museum Ron has designed, although he has also designed the public space of the Tel Aviv Opera House. The Opera House is the second most loved building in the country, after the Bahai Temple in Haifa.

You were raised in Israel?

I was born in Tel Aviv in 1951.  My mother was a painter.  My father is 96.  He was born in Tashkent, and moved to Vienna when he was 7, with a little note.  He went to Israel when he was 17.  He started out on a Kibutz.  He was a sculptor. They did not let him work.  He moved to Tel Aviv and met my mother in Art School.  My mother became the more successful.

What did you study?

First I went to the Art School in Jerusalem, and then in 1973 I went to London to study at the AA (Architectural Association) – I was in the army before that. I had terrible days in 1973.

Why did you stay in England?

I never left Israel saying, “I am going.”   I took my guitar and London seemed exotic, more exciting than America.  When you live in Tel Aviv, music is your window.  London seemed more like culture, as opposed to Hollywood.  Listening to “Strawberry Fields for Ever” reminded me of Tel Aviv and not Liverpool.

You became an architect first?

In those days there was no architecture in London.  There were ideas.  The school of architecture was exciting.  They asked me, “Why do you want to be an architect?”  I said, “My mother wants me to be an architect.”  I said, “I have no portfolio.  I have a pencil.”  But I became an architect.  I tried to work for another architect and I quickly understood I was not made to work for other people.   I walked out one lunch time and did not come back.  I decided to go to a graveyard for cars and took a seat out of a Rover car.  Then I transformed it into an armchair –  and then I made furniture.   My armchair “The Rover Chair” is like an icon.   It made my name.

Then I made a cement work called “Concrete Stereo.”  They were works of art and they sucked me into the design world.  Vitra called me, a Swiss guy, and I read in a magazine in ‘81/’82 that I was the most interesting designer to come from London.  I made a piece for a Vitra edition and I made “The Well-Tempered Chair.”  It became an important piece in the eighties.  Then I made another chair,“The Tinker Chair”, which was made by my own studio.   “The Big Easy Chair” became like my signature.  I worked a lot for Italian companies…. I did a lot for Alessi…..

Who did you admire?

Castiglioni, Gaetano Pesce, Giò Ponti.  I met Castiglioni and Ettore Sottsass.   I knew the work of Carlo Mollino and admired him. The first time I was in Turin I went to visit Casa Mollino.

When did you start building?

Only after I had made my name doing things in different fields.

What is the difference between an artist and a designer?

The destination of what you do, of the project.   When I do a studio piece for myself, like the pressed cars, the stainless steel cars that are now in exhibition at the Pinacoteca Agnelli, these are works of art.

Did you exhibit in the USA?

I had a retrospective at the MoMA and the Pompidou in 2009 and at the Barbican in London in 2010. My show was called “No Discipline.”

What materials do you use?

I use a lot of steel.

What were your first buildings?

The public space of the Opera House in Tel Aviv, the Holon Design Museum, and I have worked on the hippest building in Tel Aviv, an office block that just started.  And I was selected for a competition on the Holocaust memorial in Ottawa.   I did a shopping mall of a half a kilometre in Liège.   Now we have more commissions as architects.  Now we are 22 people.

I live in Hampstead in North West London.   I have two daughters.   I am married to an Israeli woman.   I have a line of eyewear.

Yes, I always wear it.   I wish I belonged to the group of people with a head of hair.  I have good hats. I make shoes, coming out soon for a company called Flip-Flops.  We are working on a prefabricated house. I am designing it for a company in Hong Kong.  The house is being made in Italy.  It will be called the Onion House because it is made up of layers.

What do you think of Israel?

It is a very troubled region of the world.  It will take years for the Islamic world to sort itself out.  I am afraid of the progress of fundamentalism in religion.  More than 50% of people who start school are orthodox – where is that going?   What is the best case scenario?  – There is a terrible government who have failed to understand the main task.  Security is important but there should be a selection, otherwise what?   I love Tel Aviv.  Tel Aviv loves itself.   I love the weather, the cafes, the people – but it is like a bubble.  Also, I love it because I grew up there.

My parents’ family car was a Topolino Giardinetta.  Then, in Rome, where I was working, I saw many 500s.   Why is it a survivor?   The 600 is better looking, but it has not survived. It is the smallest object that has the recurring condition to be called a car.   So when I came back from Rome I saw a 500 advertised as selling for £500 and the vendor’s address was right next to my house.  Next day I bought it.  That was 30 years ago.  Years after, my students painted it with phosphorus.  Then, when they launched the new one, they asked me to customise one. It is the car I drive now, but I am not a fetishist of cars.

In Reverse at the Pinacoteca Agnelli 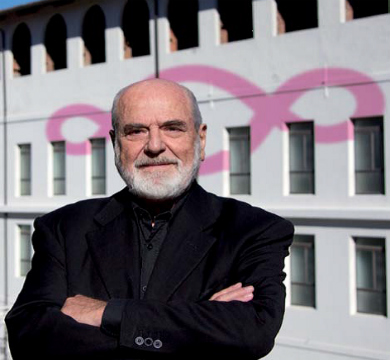 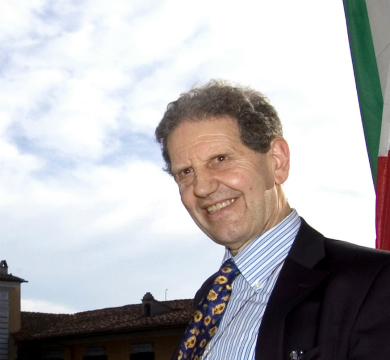 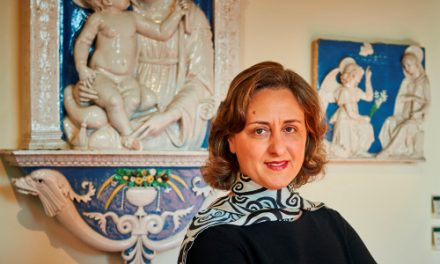