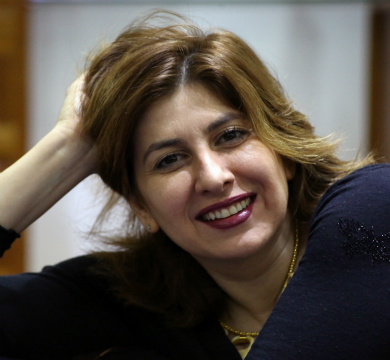 Life in Iraq today is archaic and dysfunctional – and on show at the 57th Venice Biennale.

Tamara Chalabi is co-founder and Chair of the Ruya Foundation for Contemporary Culture in Iraq. She is co-curator of Archaic at the National Pavilion of Iraq for the 57th Biennale in Venice with Paolo Colombo, Art Advisor at the Istanbul Museum of Modern Art. Tamara is from an influential Iraqi family, but was raised in exile. 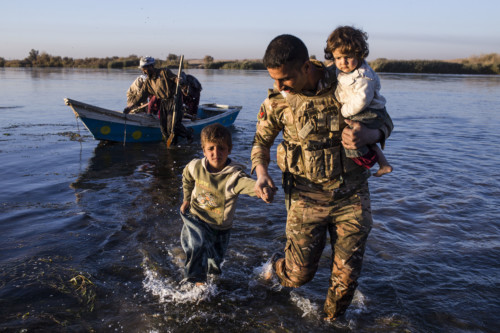 Ali Arkady (b.1982), The Land Beyond War 2017. Photograph from photobook project. Courtesy the artist and Ruya Foundation © Ali Arkady

Why did you write your very successful book Late for Tea at the Deer Palace: The Lost Dreams of My Iraqi Family?

I am half Iraqi because of my father and was born into a family of exile, a community of longing and all that relates to the old story of exile. The book is my way of coming to terms with this very complicated identity and the relationship with my father who has since passed away. Since the 2003 invasion the place Iraq has nothing to do with what I grew up with, so this book is my way of making sense of that inheritance. Being followers of the Iraqi ancien regime was politically defining for my family. They were pro-monarchy. The royal family of Iraq were killed in 1958 and then you had pan-Arabism. The Ba’athist party came to power in ‘63 and the gradual process of decline sped up with time.

How do you see your father Ahmed Chalabi’s return to Iraq to oppose the Ba’athist regime of Saddam Hussein?

My father came back to the Kurdish area in the 1990s. He was behind setting up the Iraqi National Congress, and the Iraqi opposition was then unified under one umbrella. Personally secular, I am a Shi’a Muslim, which is a complicated minority in the Middle East. Being historically persecuted and never politically empowered defines a lot of the story of how my family has existed. 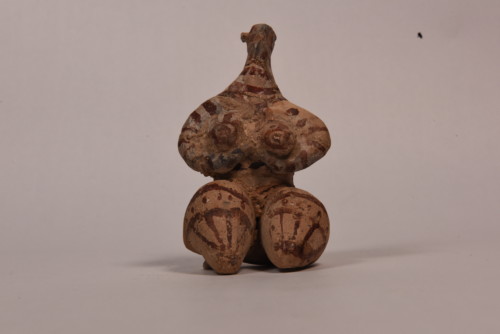 Figure, presumed to be a fertility goddess c. 6,000 BCE. Clay. Returned from Holland in 2010. Courtesy Iraq Museum, Department of Antiquities; Ministry of Culture, Tourism and Antiquities; and Ruya Foundation

Is your family’s exile now over?

The experience of exile does not go away because you have the physical land. Now there is a country and you don’t know what to make of it. It is similar to the diaspora Jews. 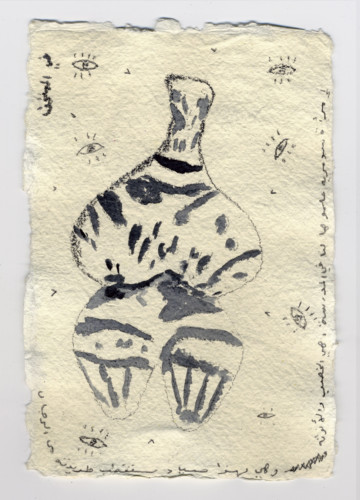 Is that why you started the Ruya Foundation?

Ruya was formed by a group of expat art lovers to preserve Iraqi culture. We set it up in the hope it would become the Iraqi equivalent of the British Council. Registered in Iraq, but with people who have a strong footing in the West, it is a bridge between Iraq and the world and vice versa. The legacy of archaeology and history of Iraq is lost to the wind. Ruya has a very extensive database of artists from Iraq that we try to promote. We have an online magazine, we do workshops, we mount exhibitions, publish books and support artists in various projects. 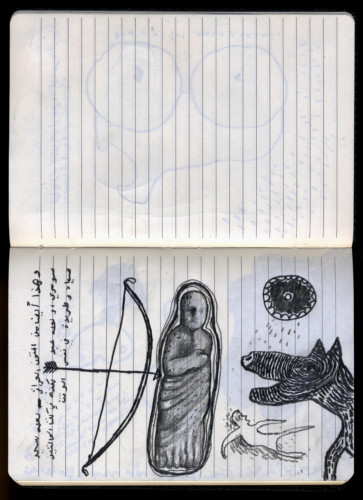 How come Ruya is responsible for the Iraq Pavilion at the 57th Venice Biennale?

This is the first Biennale that I am co-curating with Paolo Colombo, but at two other Biennales, the 55th and 56th, the Iraq Pavilion was also commissioned by the Ruya Foundation. The Ministry of Culture gave us permission to represent Iraq as long as they had no financial responsibility. The bureaucracy in Iraq is chaotic and they are completely disconnected from what’s going on in the world.

Are you a kind of cultural bridge between Iraq and the world?

Yes, the Ruya Foundation is. Culture is a very strong tool for communication and for promoting peace and creative expression.

Sherko Abbas (b.1978). The Music of the Bush Era 2017. Cassette tape in mixed media installation. Courtesy the artist and Ruya Foundation © Sherko Abbas

Will the Iraq Minister of Culture come to the Iraq Pavilion this year?

We believe the Minister of Culture is coming, as we have borrowed artefacts from the infamous Iraq Museum that was built and opened to the public in 1926 and looted in 2003. It reopened to the public in January 2015. The Iraq Museum was started in 1923 by Gertrude Bell, who committed suicide in 1926. When I went to Baghdad it took me five months to find her grave and then restore it, and now I arrange to keep it up with flowers and so on.

What is your view of Gertrude Bell’s role in the establishment of the state of Iraq?

Faisal, Churchill, TH Lawrence and Gertrude Bell more or less created the state of Iraq. They decided it was cheaper to give Iraq self-rule as a British mandate than to keep it as an appendage to the Empire and that’s how Faisal became King Faisal I. The Chalabi family was close to the royal family and my great-grandfather gave his allegiance to Faisal and supported him. 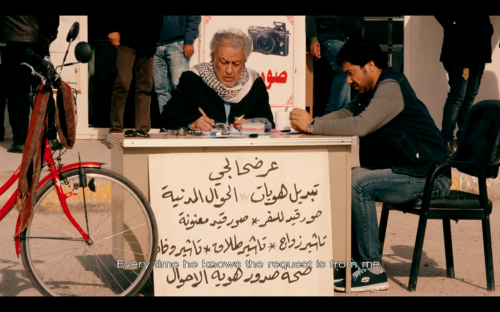 Why is your title Archaic?

If you look up the definition of ‘archaic’ it has a tension, on the one hand there is what is old, ancient and innate, intuition at a certain level, and also ‘archaic’ is what is no longer relevant or news, like an old telephone or video machine. This is an apt description of Iraq, which the world associates with the very beginnings of civilisation, Sumerian and Assyrian culture where writing developed, the wheel was invented, agriculture, the Old Testament… but at the same time Iraq today is an ‘archaic’ country in its geography and politics, and society functions on primordial lines where people are broken down by sect, religion and ethnicity. It’s ‘archaic’ and dysfunctional. The term Archaic itself is very suitable. 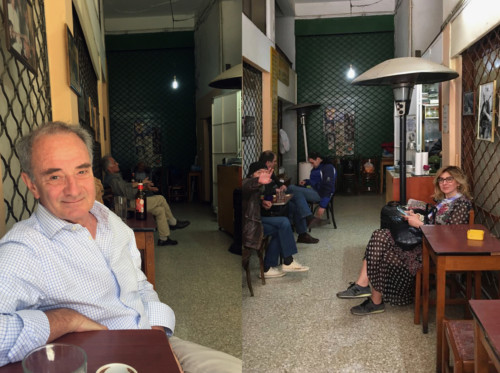 Portrait of Tamara Chalabi and Paolo Colombo, Co-curators of the National Pavilion of Iraq at the 57th Venice Biennale. Courtesy Ruya Foundation

What are you and Paolo Colombo showing at Archaic?

We are showing 40 pieces of antiquities from the Iraq Museum related to themes of the ‘archaic’, objects related to writing, to sound, to music, to land and to water. Archaic is a large general theme. The show includes Jewad Selim and Shakir Hassan Al Said, artists from the 40s and 50s who were educated in the West at the Slade and the Beaux Arts and came back preoccupied with finding an Iraqi modernist vernacular. Then we have six contemporary artists, living inside and outside Iraq. We have supported and commissioned very interesting new works for this Biennale. 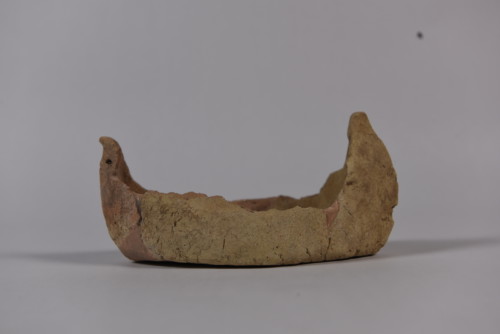 When does Archaic open?

We open to the public on May 13th and continue until 26th November.

Does the Iraq Pavilion work well in the Palazzo Cavalli-Franchetti?

This place is perfect for the display of artefacts in an ‘archaic’ space, with layers of history and erudition in it, in conversation with the theme of the exhibition. We were very determined to find this kind of space.

Why do you show work by Francis Alÿs, a Belgian artist living in Mexico?

Ruya does creativity workshops for survivors in refugee camps, especially with the very much persecuted Yazidis, and we have worked with other international artists including Ai Weiwei. Paolo and I wanted Francis to participate because he is an international artist who has gone to Iraq. In late October 2016 Francis came to Erbil and was embedded with the Peshmerga on the front line for a week. He was very curious about the role of an artist in the immediacy of war.

How is the state of art in Iraq?

The problem is the system. Everything is state run, but the state is dysfunctional. Art colleges are like something from the backwaters of Bulgaria. There is not much of an art market, galleries are almost non-existent, and those that do exist are not connected to the world. Unfortunately. We try to cover the gap. 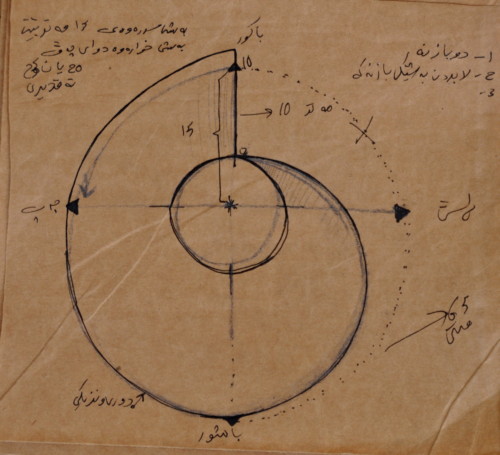 Does the Archaic exhibition in Venice carries a message of hope?

Yes, absolutely. The Biennale is one of the very few venues where as a country we can showcase Iraqi artists and cultural life. The message in Venice is an insistence on existing, on communicating, and it is a form of survival. It is not a historic show. The theme can be applied to many other countries, but this show is the beginning of a conversation, making people think differently about mixing archaeology and contemporary art to create a new language. The distant past is far away, the present bloody and violent. Archaic is to challenge peoples’ notions of what this means. 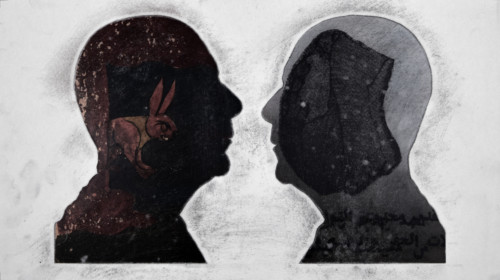 Why did so little international cultural exchange come from the Iraq war?

The Italian soldiers were in the south in their bases and not in cities, and the Americans sat in the Green Zone after declaring the occupation that lost them the moral argument. 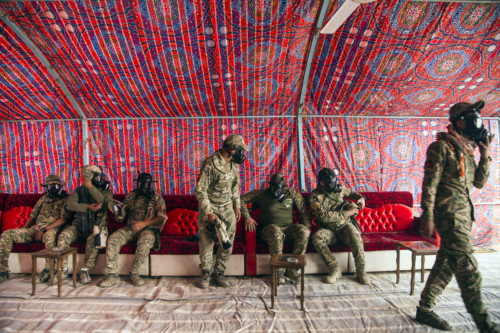 Ali Arkady (b.1982). The Land Beyond War 2017. Photograph from photobook project. Courtesy the artist and Ruya Foundation © Ali Arkady

How is life in Baghdad?

It was a city that was safe but under heavy sanctions and run by a dictator. Then there was complete insecurity and collapse of the state. Then came the sectarian war that has now abated. Now there are restaurants and shops, life as you imagine it anywhere else, but it has very few symbols of internationalism. You don’t see the logos of international companies.

How does the war with ISIS affect life there?

There is fear of attack and last summer 300 people were killed in one day. There are a lot of refugees, there is militarisation, and there are popular militias with volunteers wanting to go and fight. But schools are working, and universities, and life goes on. It is a very schizophrenic situation, life and death. 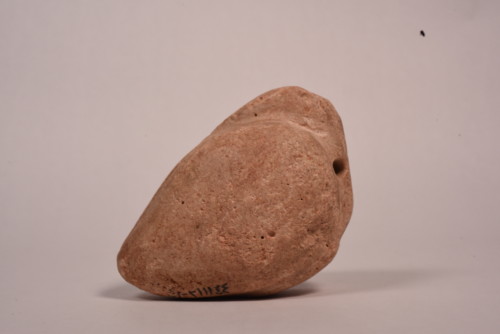 Small weight measure in the shape of a duck. Ancient Babylonian. c. 2,000 BCE. Stone. Returned from Syria in 2008. Courtesy Iraq Museum, Department of Antiquities; Ministry of Culture, Tourism and Antiquities; and Ruya Foundation

What else does the Ruya Foundation do?

We prepare workshops and exhibitions in Baghdad, and we have an ongoing series of Ruya notebooks which provide translations into Arabic of important articles and essays selected by leading artists and curators. We aim to make them available and distributed all over the Arabic speaking world.

Will you publish another book?

Yes, I have written a new novel called The Wedding Carpet that will be published at the end of the year. It is about art and identity. Specifically it is about the journey of a girl from the Qashqai tribe in Iran and her wedding carpet, and the journey she takes from the mountains of Iran to New York City. 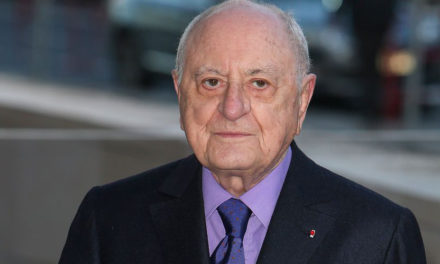 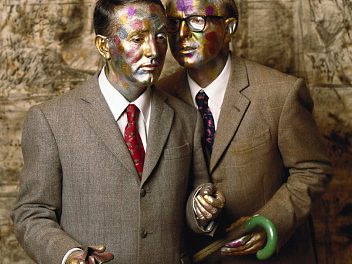 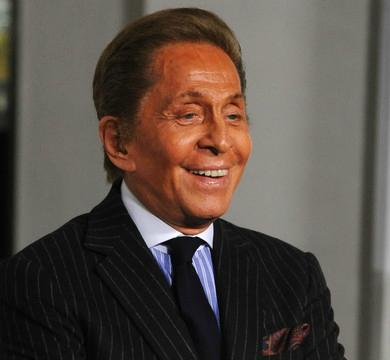