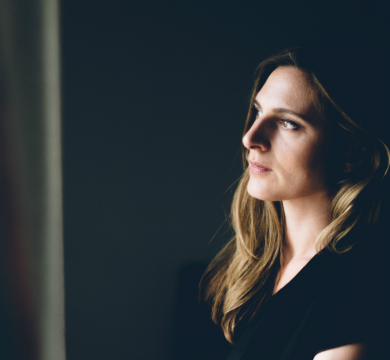 “I am a filmmaker. I went to university in London and studied Anthropology and Art History, and then I went to NFTS (The National Film and Television School). They only take five students per year per discipline; I did Documentary Direction. Anthropology gave me curiosity on how art forms have a function in society; ethnography evolved into documentary making. The context of the story, the nuance behind the main storyline, is what interests me.” 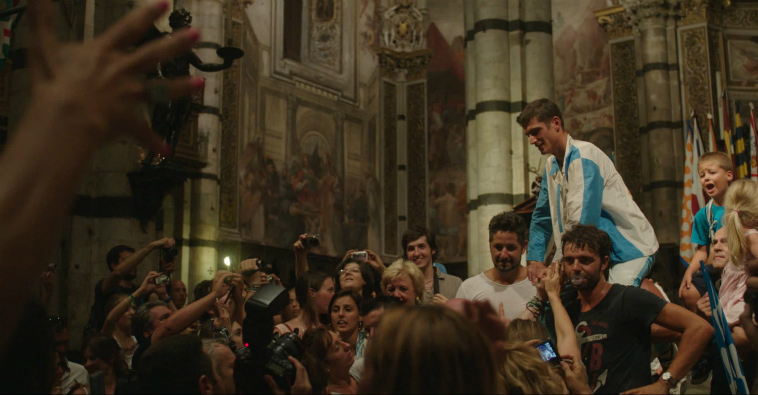 A Palio jockey in the Cathedral of Siena

Cosima, how did your recently released film “Palio” come about?

Since 1999 I wanted to make a film on the Palio di Siena, but it was too ambitious for a graduation film, too complicated, and in need of too much research time. So I had to wait. 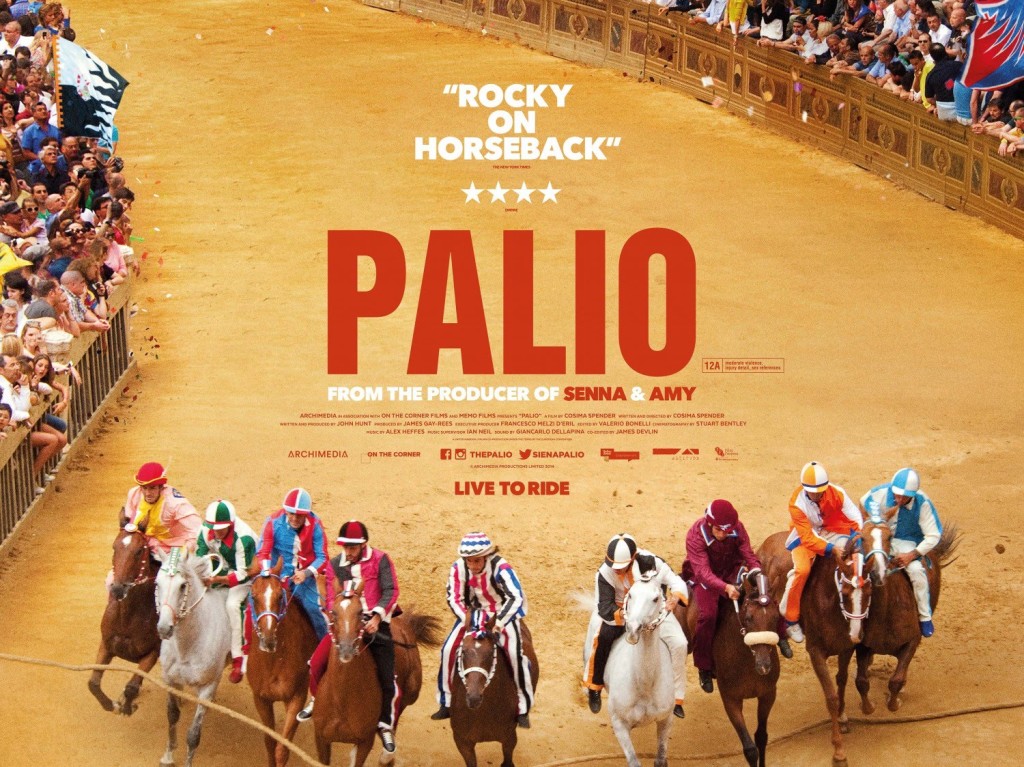 What was your first documentary?

My graduation film was a portrait of the stag hunting community in Exmoor, which has been stopped by animal rights and no longer exists. If you contextualised the hunt, it showed the community and the relationship people have with nature, a relationship of respect across all classes. They only culled the old stags. Now they kill any stag with a shotgun.

Then you made a film called “The Importance of Being Elegant” in 2004?

It is a portrait of a Congolese community from Kinshasa who live in the margins of Paris and Brussels and are obsessed with haute couture. They are petty criminals and very invisible to society, but they dress like peacocks and are incredibly visible when you see them. They belong to a society called La Sape, (Société des Ambianceurs et des Personnes Élégantes – the Society of Revelers and Elegant People). We followed these very flamboyant followers of Papa Wemba, a famous African musician, whose music is very sexual and rhythmic. 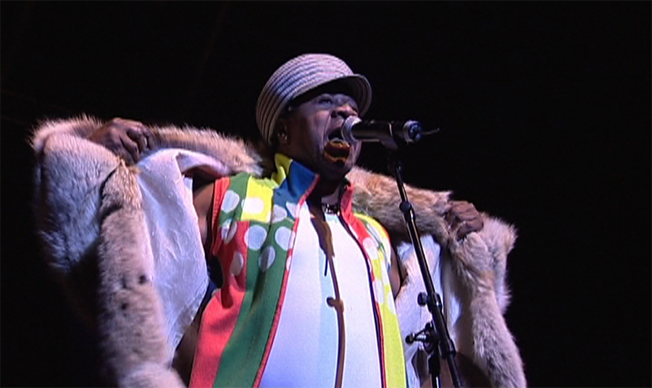 “The Importance of Being Elegant” showing Papa Wemba playing a concert in Paris.

How did you find them?

Mainly a society of men, they meet at 3 o’clock in the morning at places like the abattoirs near Charles de Gaulle or in the red light district of Brussels, and they perform strange dances. It is like a catwalk for men, dressed in the most eccentric haute couture. They are people who want to project wealth and status in a society where they have no status. The film was shown on the BBC. 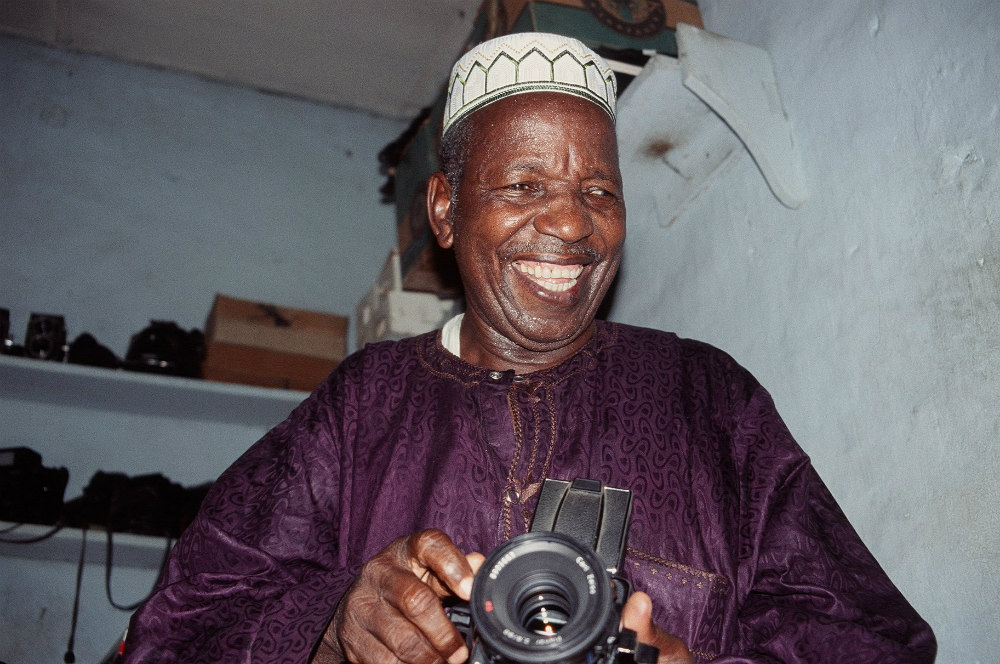 Malick Sidibé is a Malian photographer.

What other films have you made?

“Dolce Vita Africana” on a Malian photographer called Malick Sidibé ; and then “Without Gorky”, a film on the painter Arshile Gorky, my grandfather. It is a film about the women around him.

Gorky died when he was only 44?

Yes. He committed suicide when my mother was five. When someone commits suicide a lot of guilt pervades the family left behind, and many unanswered questions. 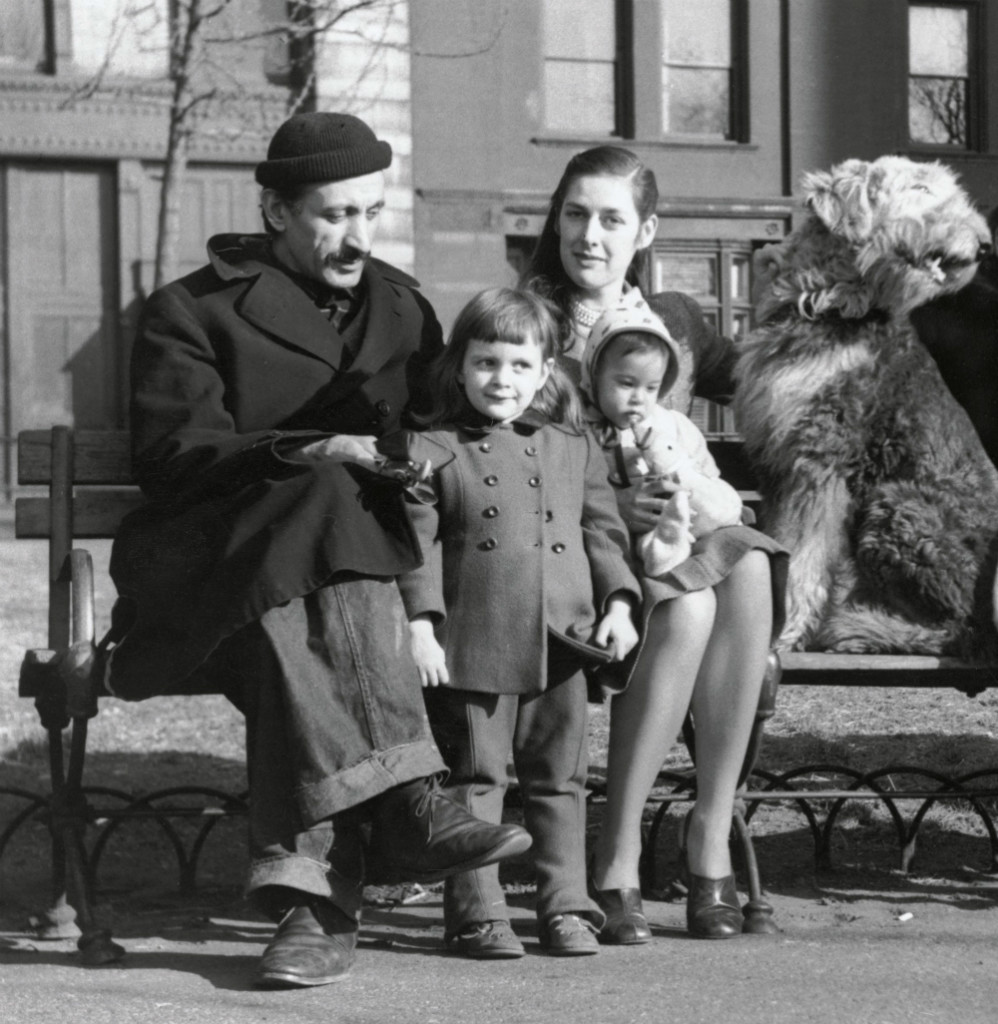 The artist Arshile Gorky with his young family.

Yes, and he wanted to control his destiny and not let the illness reduce him to the process of death. They were Armenian refugees and he had seen death at close hand; his mother died in his arms at the end of a long march of death. He went to America, where he married my Waspy grandmother. As an act of rebellion toward her parents she married this very talented but not well known artist. After his suicide my grandmother remarried and the family moved to Positano in the Fifties, then to Paris and London. My mother met my father in London, when she was 18 and he was 16.

Why did your grandparents disapprove of your mother?

Because she took away their child at age 16, and he was taken over by the matriarchal society of my mother’s family. My grandparent Spenders found that problematic.

Your grandparents are quite a heritage. Stephen Spender was a great poet and a very well-known cultural figure?

Were you born in Tuscany?

Yes, I was born at home, in the countryside near Siena, where my parents embraced the return to nature movement. It was a very simple life. They were hippies without the drugs. They wanted to make art and they made their art alongside the Italian artisans. They love the Italian traditions, the light, the beauty of the landscape. 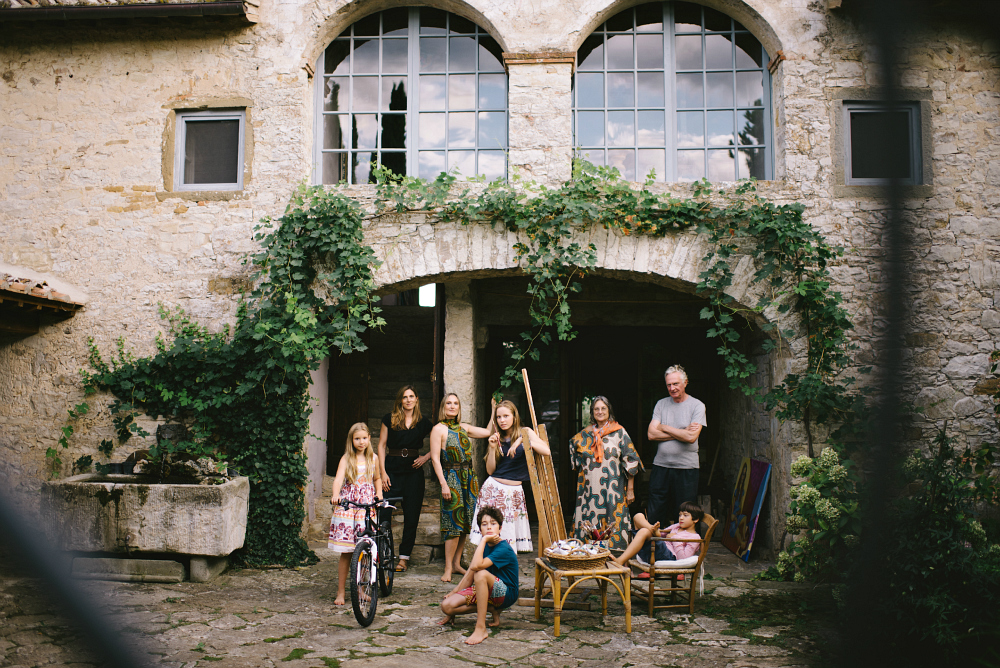 Did you enjoy being raised in Italy?

Yes, I went to school in Siena until I was 14, and my friends were village people. We also had interesting friends coming to the house in Tuscany, so there was a contrast between local school life in Siena and life at home. Bruce Chatwin would come to the house, for instance, and they wanted to recreate the Arts and Crafts movement. My parents are still together and their monogamy is an act of rebellion from where they came. I really respect and like my parents. They have low self-esteem, even though my mother is a brilliant painter, and my father a very good writer. My sister makes ceramic tiles – we are all artistic.

On what money did they survive?

They were selling paintings by Gorky, and my father is a sculptor and also writes books. My mother is a painter and she wanted to live the ideal life her father never had. Gorky grew up in an Armenian village and she wanted to create a house that my grandfather Gorky would have loved. My father wrote a book on his memories of his parents’ difficult relationship. His father had gay relationships and it was complicated. As a child it is not easy to see your mother suffering. You always react to your parents and they made their lives as simple as possible. They were very hands on, they worked in the fields, doing everything themselves to try and keep life simple. They wanted to do the best art and not even be obliged to sell it, just living an uncomplicated life.

Did you know your grandfather Stephen Spender well?

He died when I was 18. I knew him well. I remember his charming, smiling giggling face. My grandparents remained married, and for him it was important to be free. His creativity was linked to his life experiences, and he needed his freedom to be who he was. But, for a wife, to be peripheral to your husband’s life is difficult. 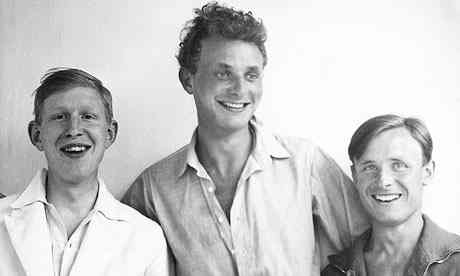 Did your grandmother take any lovers?

She had a relationship with Raymond Chandler, but it is not clear if it was platonic or not. She was an illegitimate child, and they gave each other a family structure. That was essential, as homosexuality was illegal.

How did you children react to this simple and special upbringing?

We live in London. I have tried to engage with the world much more. My parents turned their backs on a privileged intellectual background; they preferred being isolated artists and they did not want to engage. I am less isolated and very interested in the world; I try to engage more. Films are about human relationships, but my parents influenced me in not trusting, not spending too much time thinking about how to promote yourself. 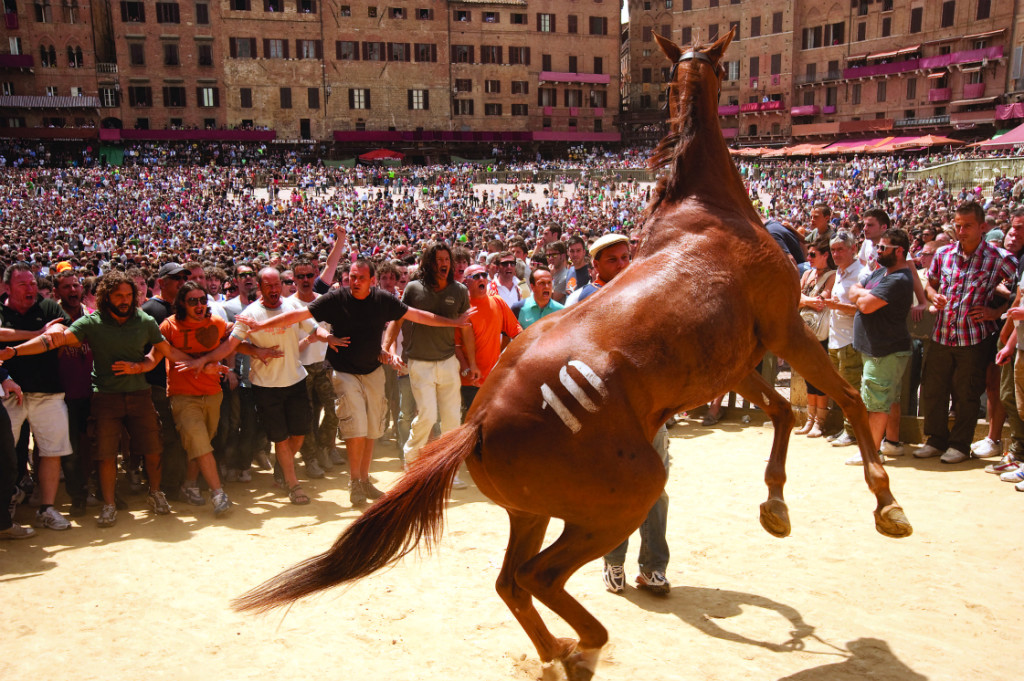 Was making the documentary “Palio” going back to your roots?

Yes, it was very much applying all that I learnt in my other films; and with a much bigger subject than anything I had done before.

“Palio” has been heavily promoted and successful?

But that is not my job. It is the producer’s job to unleash the film on the world. The director engages with the subjects of the film and tries to make the best film possible. I am more interested in the process, which is very important. I am not motivated by success. It is a bonus if it goes well and gets seen. 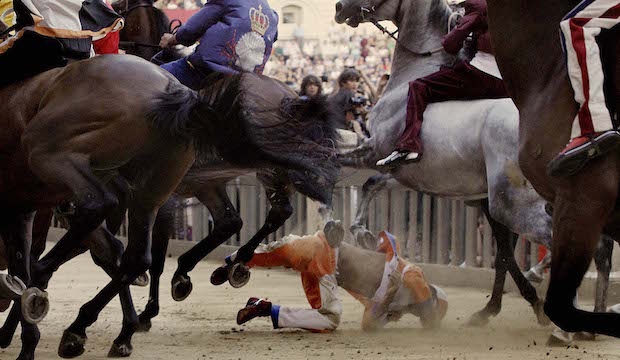 How long did it take to realise “Palio”?

It was very fast, we only shot for 35 days overall. Then you spend a year editing, that is when you are writing the film. Basically I need a great editor and luckily I had my husband, Valerio Bonelli, who does fiction films. He works with Stephen Frears, making films like “Philomena” and “Florence Foster Jenkins”.

Do you have a new project?

Yes, I am writing it with my father. It is a fiction project based on a chapter of his book “A House in St. John’s Wood”. The film takes place over a Christmas where Matthew’s (my father’s) mother, my grandmother, goes to America to give some piano concerts. My father was 12 and he realises his father is “gay” because over Christmas he became very close to a writer who came to stay. At 12 years old he is trying to understand the dynamic. 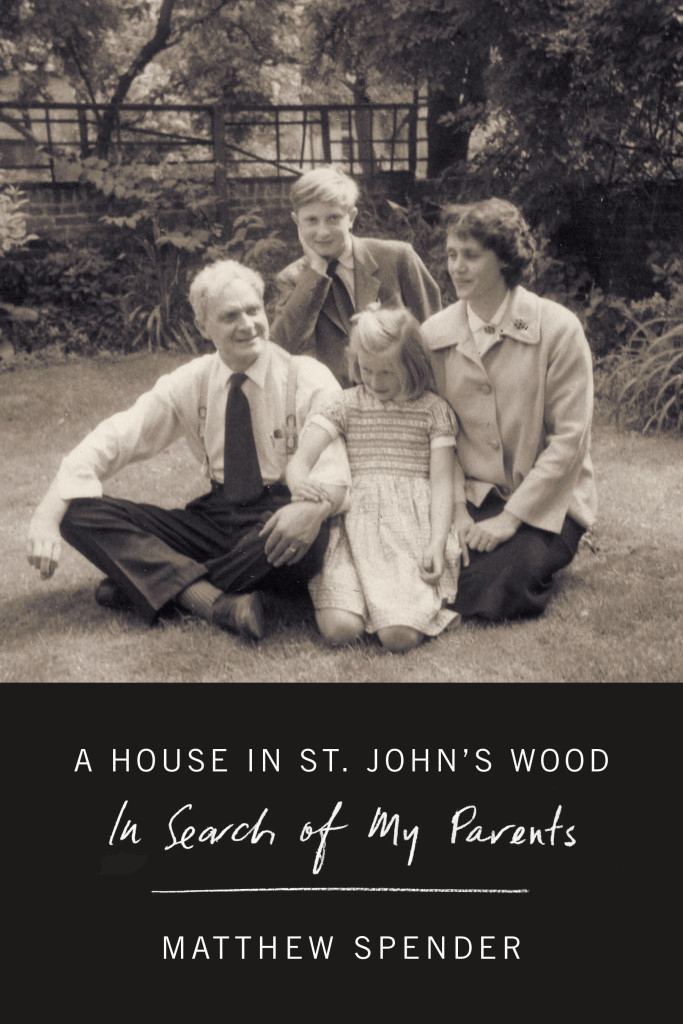 How is it going?

We need very good actors and we need financing. My father has been in New York and we are still working on the screenplay and meeting producers at the moment.

Do you want to change from documentary making to fiction?

It depends on the story that I want to tell. Stories which happened in the past lend themselves to fiction, while stories which are unfolding in the present lend themselves to documentaries, if you can get the access, because in documentaries no access means no film and that can become very frustrating. “Palio” relied completely on the unique access I had, because I could relate so well to the people as I grew up a Tuscan. However, while shooting “Palio” I was continually frustrated by the access problems. There was so much more I knew about that I could not get access to. 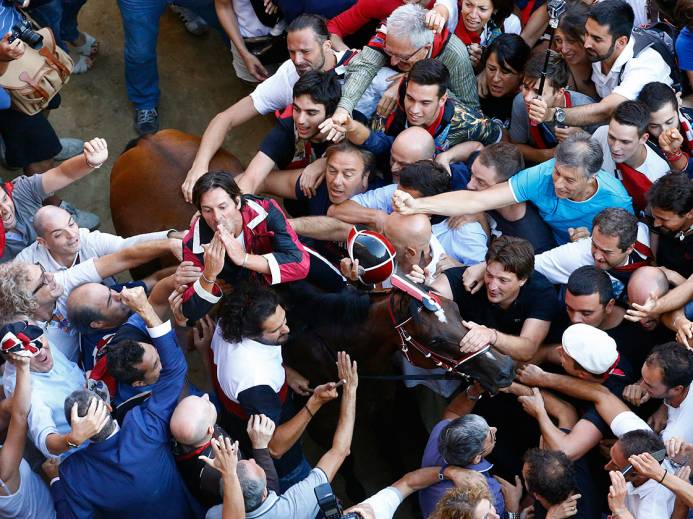 This will be your first fiction film?

It will be my first film with actors, but “Palio” was structured like a fiction film and I directed the camera. It was a very directed documentary, not an archive documentary. 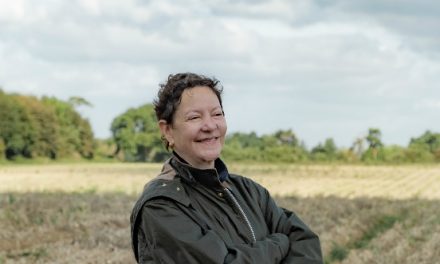 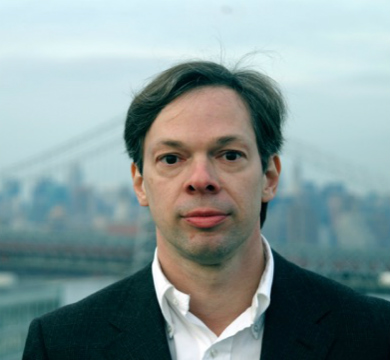