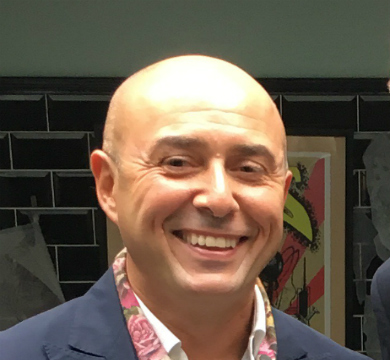 You don’t have to have a reason for adornment. It’s pure aesthetic.

Mo Coppoletta is widely known as London’s ‘Godfather of tattoos’ and operates his tattoo parlor ‘The Family Business’ in Exmouth Market, a historically vibrant area of London once known as ‘Little Italy’. A nearby building commemorates Joseph Grimaldi with an English Heritage Blue Plaque. Grimaldi, the most popular English entertainer of the Regency era, made his name playing a whiteface harlequin clown in his own make-up design.

You are located in Exmouth Market, which used to be called London’s ‘Little Italy’? Why here and not in Soho?

I just fell in love with the area. It retains a lot of what London used to be, Victorian London with cobbled streets and so much history. There have been waves of Italian immigration to this area. 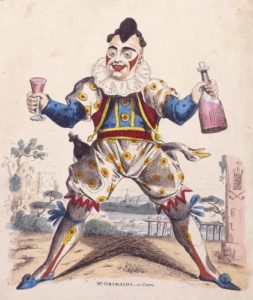 You are a lawyer from Verona. How did you open a tattoo shop in London?

It was a long journey, not overnight. Law school came by default and in the meantime I was dealing in antiques and bikes, and playing in a band. I was not really a rebel, Verona is a comfortable city and I was enjoying life. All of a sudden, when I saw the first images of the renaissance of tattooing in America, I fell in love.  In the early 1990s San Francisco and New York were the two main schools. When the passion started I collected tattoo magazines and travelled the world meeting tattoo artists. At the time it was very difficult to gain information. 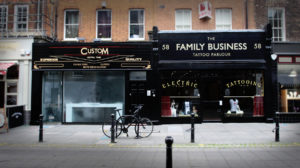 Why do you call it a renaissance?

Tattooing was the same for centuries, good tattoo artists replicating classic icons and old drawings without adding flavour. In the 1980s and 90s a new breed of tattoo artists started exploring from the artistic point of view rather than the application of the tattoo. It became custom tattooing, a tailor-made design specifically drawn for the customer. At that point tattoo artists started developing their own style. The renaissance of tattooing permeated the magazines of the time.

Is it a fashion?

It is a big fashion trend. The audience changed with the glamorisation of tattooing, with VIPs and the show-offs on social media, sportsmen, singers, rock stars, footballers like David Beckham, who was the first one who bought it to the mainstream, and after that it was like a snowball. In America ten years ago TV shows helped to bring it to the mainstream, and in the last eight or nine years the general public became the customers. 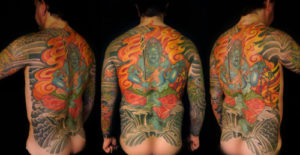 Is it a phenomenon?

Before it was for collectors, now it is a commodity, it is so widespread. It lost that exclusivity. The once clear distinction between tattooed and non-tattooed is now blurred. Almost everybody on the beach has a tattoo, small or big. It’s not shocking any more, it’s not seen as a symbol of rebellion, it’s just a fashion accessory. The age bracket is between 25 and 45 in our shop, that’s the majority, and it is 50/50 men and women at the moment. It’s a widespread phenomenon.

What was your own first tattoo?

On my shoulder, a dagger through a heart. A classic design.

How many do you have?

My sleeve, my torso, part of my legs. Now I have stopped. The older you get you want soothing things rather than painful things. When you do it, it is quite painful. It is a pain that has a lot of rhythm.

How long does it take to make a tattoo?

It depends on the intricacy of the design. Full back is 40-50 hours, sleeve 20-25 hours, spread over a few months. Sessions are for 3 or 4 hours, every couple of weeks.

How long does the pain last?

The pain is when you apply the tattoo, there is discomfort for a couple of days. It needs its healing process and its healing period.

Since when did women start to be tattooed?

It was part of either freak shows or travelling side shows in America, also in Europe and Germany. Recently, the first group of women were associated with the Hell’s Angels biker movement in the 70s. Women followed the trend, and after the renaissance in the early 90s it was women as much as men.

Are your clients shy when they come for the first time?

That depends on the person. Some are very determined and know exactly what they want, some are making enquiry, some are just browsing. Tattooing is a very intense, personal and full on process. People do not treat it with the respect it deserves. It is like plastic surgery. Everything is amplified. 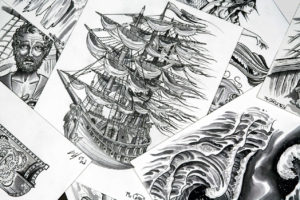 Where do your clients come from? Are they mostly English?

They are from all over the world, westerners most of all. Anglo Saxons had a huge tattoo history because of the sailors and everything maritime. Copenhagen and Amsterdam have very old tattoo shops going back hundreds of years. Also Los Angeles. All the places with big harbours. Now the most tattoos are in London and New York. They say 40% between the age of 18 and 29 are tattooed and that it will reach a peak in 2025.

Who are some of your famous clients?

We don’t want to advertise as being the tattoo artist of famous people. We are a quality shop. It’s our style and overall quality that brings people like the Chapman Brothers, Jude Law, Paloma Faith, Maxim from Prodigy, Gizzi Erskine and Kate Moss. 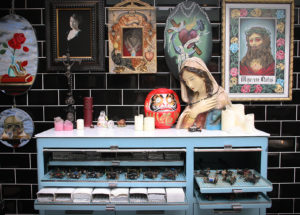 Is it a sex symbol?

I don’t think so. No, you are what you are. It is just an accessory.

What parts do people tattoo?

Men everywhere, especially arms. Ladies, ribs and backs. Women are more thoughtful and a bit more particular, men tend to get stuff in a much quicker way. 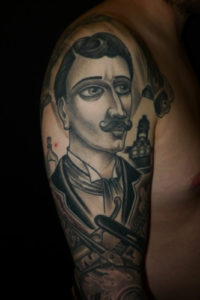 How much does it cost?

We are at the top of the range. Small tattoos are a couple of hundred pounds, big back pieces several thousand depending. People take out loans to get tattooed.

Does tattooing have a mean feeling?

Not any more. It’s like gays, it became petit bourgeois now. What I say is that these days people think they have to have a meaning for them. These days everyone has small symbols and has to find reasons to get tattooed, everyone tries to dissect a meaningful reason to get a new symbol on their body. I find this strange. This wasn’t the case ten or fifteen years ago, it was just adornment, images you liked. Getting tattooed as a fashion accessory is a bit disrespectful to the art of tattooing.

Are there health risks for people who get tattooed?

There can be in the wrong hands and applied incorrectly, there is a risk of hepatitis. We go through an incredible amount of sterilisation procedures, like a dentist. Here there is virtually no risk of infection. 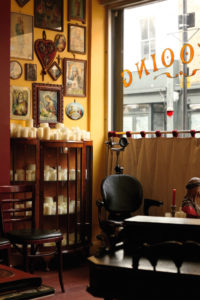 Do you think it is an addiction?

Yes, it becomes an addiction. You start with one tattoo and then you want to add. Our customers come back for more and carry on.

Is there a best seller image?

There are always trends and latest fashions. When there is a trend it stays for three or five years, and then it changes to the next thing.

Twenty years ago it was dolphins, then Chinese/Japanese ideograms and symbols, it moved to tribal images from Polynesia and Borneo, then script and letterings. Writing is still a big trend. Now it is Indian inspired mandalas. People follow the trends and from their skin you can pinpoint the date they got the tattoo. I urge study and research and not to rush into anything. 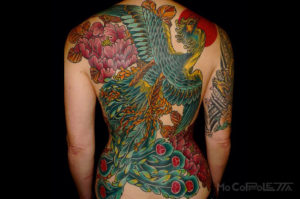 Can you erase them?

It’s a very long and intrusive process that requires multiple sessions and takes a long time. Sometimes people go over a tattoo with a new one to obtain a more successful cover up.

What happens when you age and get wrinkles?

What does tattooing mean today?

It became a part of your outfit, your look. This is scary, as it is permanent. I would love to see in fifteen years how many regret and how many are still happy. You might change your mind, your taste. We evolve completely. 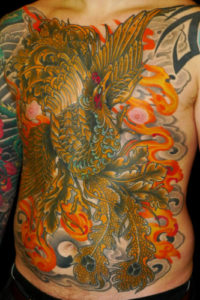 Do you regret yours?

I don’t know anybody of my age who has regrets. It required a thought out plan, you had to discover, research, plan, find and then get. When your mental process is as complex as that you will not regret your choice. Getting a back piece in Japan you would not regret. It links your life to a specific time.

Do you think that tattoos’ momentum will pass soon?

We have been saying that it can’t grow any bigger for fifteen years. I suppose it will stabilise, but it won’t drop, because now there are a lot of parents who are tattooed and children will keep these memories.

Do you consider yourself an artist?

English and Italians give a different meaning to the word artist. Artist in English is a name you can give yourself or award to someone who holds a pencil or piece of paper. In Italy the community say if you are an artist or not. Tattooing is closer to design. You have to plot out, design, think, organise and then, if you manage to put your style and vision into that design, you might call it an art. It is refined design skills, not Art with a capital A. 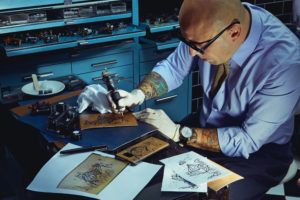 I love it, because you create an intimate relationship with the customer. It is the skill I learnt and it requires a lot of meditation. It is a focus and great source of inspiration for the rest of the work I do.

What is your favourite tattoo?

My repertoire is widespread. I prefer full arms, full sleeves with decorative patterns, a big adornment, to embellish rather than fill with meaningful images. You don’t have to have a reason for adornment. It’s pure aesthetic. 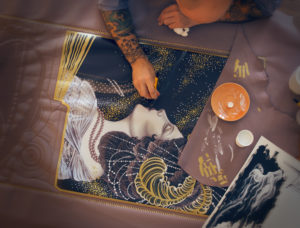 Is yours a luxury business?

It’s not a necessity. It is permanent jewelry. Because it’s so prominent people give it a deeper meaning. They love to have a tattoo among their belongings. You can’t leave it behind, even when you die. 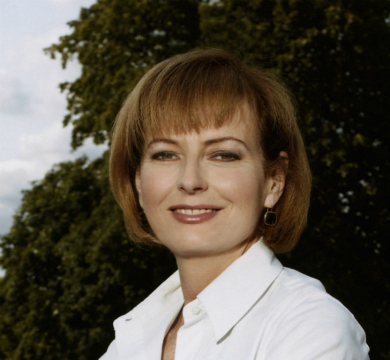