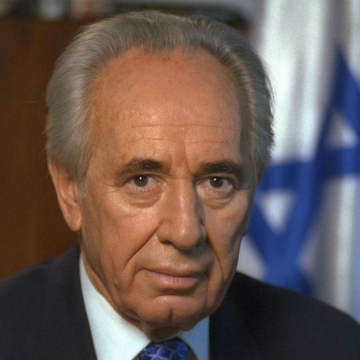 With great sadness we learn of the death of Shimon Peres, one of Israel’s great leaders – a man who devoted his life to serving his country and the world. 28th September, 2016

“Looking back the only mistake we made was not dreaming big enough. Let’s dream big, let’s look ahead, and make the world a better place, a peaceful place, for all people.” Shimon Peres 1923 – 2016.

“I have faith in Arafat.”

The year is 1999. On the ninth floor of a modern building in the centre of Tel Aviv, there’s a little door with a small nameplate. One rings the bell and a plain-clothes guard opens the door and asks a few discreet questions, a bit like in the airport. Shimon Peres is waiting with a smile on his tanned face. He is wearing dark brown pants and an electric blue shirt without a tie. In Peres’ library, there are biographies of statesmen and photographs of him with American presidents, and especially with his mentor and former boss David Ben-Gurion. 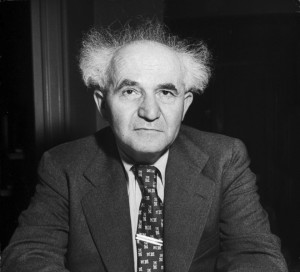 Shimon Peres, you are the Regional Cooperation Minister in the new Barak government. How do you see the first steps taken by the new government?

After a three-year “glacial period,” there’s a new feeling of things opening up toward peace, which is a big change in and of itself.

Do you believe Barak is doing a good job as prime minister?

He is doing things his way and moving in the right direction. Everyone is entitled to his new successes and new failures.

It means that Barak thinks the Americans should have a different role – not as a police force but as intermediaries for peace. 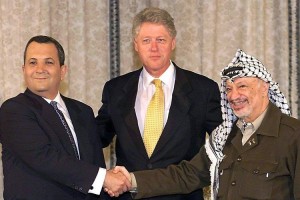 And what do you think?

I don’t think the United States is trying to act alone or as a police force. And I don’t see problems with the U.S. as long as the peace process goes ahead. The United States has an enormous role in the negotiations among Israel, the Palestinians, and other countries in the Middle East. It certainly can’t be replaced.

Which United States presidents, in your opinion, have been most important in the journey toward peace?

I’m not here to give out marks. I can say that President Clinton is a president who is very well informed and whose heart is in the right place for Israel and for the Palestinians. In a certain sense, he’s the best president out of them all for the peace process.

What about the Netanyahu era?

It was a waste. Unfortunately, we can’t turn back time. We most definitely lost three years.

You didn’t meet with Assad, the Syrian president. Barak will probably meet with him. What do you think of him?

Assad doesn’t want to meet with us before there is peace, and this is a mistake because he is necessary for peace. When I was prime minister, it seemed like Assad wanted to reach a peace agreement as well. He said we could meet but said he couldn’t give me an appointment yet!

They say that Assad in Syria – as well as Algeria – wants peace with Israel so they can have peace with the United States. Do you think this is true?

In a certain sense, yes. As there is no longer a Russian superpower, they no longer have a choice. They no longer have money or weapons. It’s normal that countries like Syria, Algeria, and others want to enter into a new era and are therefore looking for the road to Washington. Syria sees that Jordan and Egypt have new weapons. They don’t have old Russian weapons like they do, and they aren’t as poor as they are.

What do you think about Iraq?

I think they have a psychopath, a crazy man for a leader. There are other countries with leaders like this as well – like North Korea and Yugoslavia, for example. But I don’t think Saddam will last long. His people are living in such a terrible state, and you can’t continue to govern a country with the secret police.

What do you think about what is happening in Iran?

The ayatollahs don’t have the answers for the real needs of Iran. Reason ends where holiness begins. Saying you are holy doesn’t lead to anything changing. Young people can’t take the oppression that you have in these countries. I don’t know how long change will take, but I know that the ayatollahs’ prayers don’t bring answers.

Is it true that Islamic fundamentalism is getting weaker?

Yes, because it’s self-destructive. It is definitely decreasing in Algeria and in Sudan because people want two things more than anything else – food and freedom.

What about Israeli fundamentalists?

Yes, they exist, but they don’t have weapons and they aren’t in power.

But they killed Rabin.

It was one person and not an organisation that killed Rabin. 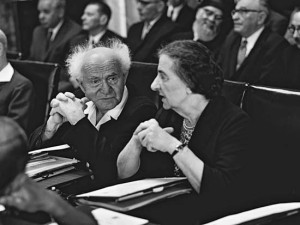 Has society changed a lot from the times of Ben-Gurion’s Israel?

Ben-Gurion was a strong character. Perhaps without him, Israel wouldn’t exist today. But when Ben-Gurion became prime minister, there were 600,000 of us. Now there are six million. He went to war before having an army. Today Israel is a big democracy with a big army and an important economy. Thus Israel beat communism, and this is why Russian Jews come to Israel, and it’s not the Israelis going to Russia.

Are there still remnants of the pioneer era?

The democratic spirit of the pioneers is still here. The big effort to bring together Palestinians and Jews and have them live in a democratic country was, in and of itself, a huge success.

And why do you think Israel is so important today? Why is it constantly talked about in all of the newspapers, especially in the United States?

Because it is an exception, a vision. In past centuries and in previous years, everyone said this was impossible, and yet it happened. I think that in Israel, it’s a bit like a Shakespearean play. It’s something that is unreal. After 2,000 years of exile, Jews returned to their land, to their language, and created a democracy. It’s more of a play, a drama, than a country. Perhaps it is the most dramatic country of all. A good drama doesn’t depend on the number of actors as much as on the quality of the actors. 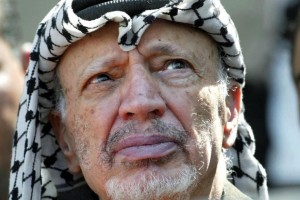 What about the Palestinians?

We need to help them to construct a prosperous, democratic country. The Israelis need to think about how the better off the Palestinians are, the better of they are. They also need to have their freedom and prosperity.

Is that a utopia?

Israel is a utopia as well, but it’s a utopia that can become a reality.

Is Arafat a great leader?

Yes even though he’s made mistakes.

Do you have a lot of respect for him?

Do you trust Arafat?

He certainly hasn’t become a Zionist! But Palestinians need to believe in him.

Do you think there is a successor to Arafat?

Even if we don’t like to about it, everyone has a successor. This is how life goes. 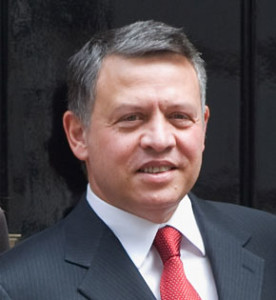 What about the new king of Jordan?

He describes himself as an Internet man. I hope he represents an old tradition in the new world. His father was certainly a great king.

What about the new generation? The new king of Morocco, for example.

The new generation is more professional and more globally oriented. Young people don’t want borders and walls. Today’s economy is the result of science and technologies that definitely don’t have borders.

Do you think the future is peace?

Yes. Peace and competition. And I believe that the new generation wants a world that is most definitely democratic. Take t-shirts and blue jeans. They are a declaration of equality just as that terrible McDonald’s and computers are as well. Young people don’t love borders. They don’t understand why they need to kill or be killed.

But there’s still a big army here in Israel. And in Jordan there’s a big army.

Why is it then that Moshe Dayan, General Rabin, you, and today Barak – all men of war – are the ones that are seeking peace more than any of the others?

Because the time for peace has come. Wars have clearly failed. We were attacked five times, and we won five times. We’ve had enough.

How are young people today taking this? Will they continue to want to do military service or are they reluctant in Israel?

As long as there is a difficult situation. As long as Iran and Iraq exist as political and military problems, it will be necessary to do military service. They have no choice.

What do you think about what is happening in Kosovo?

There’s a lack of a political solution. You can’t bomb Yugoslavia just to bomb it. If you don’t want to Balkanise Europe, you need to “Europise” the Balkans. I think it was a really unique war. The Americans fought for a matter of principal, but it was a war without military victims for those on the attack, without ground troops. And I don’t think it created any solutions. 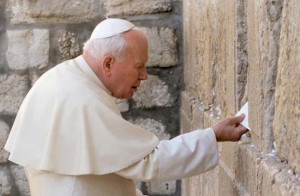 Pope John Paul II leaving a message at the Western Wall during his pilgrimage to Jerusalem, March 26, 2000.

What do you think about the pope visiting Israel? Do you think it will be possible?

I think this pope is a great pope that uses his influence and not the power of the church. He has fought hard against anti-Semitism. He was the first pope to enter a synagogue and the first pope to say that the Jews didn’t kill Jesus. He changed the character of the church. There’s no doubt about it. I was Foreign Minister when we established diplomatic relations with the Vatican, and today that relationship is excellent. A visit from the pope to Israel would be very important. What I want to say is this. I would like a world of tourists and pilgrims instead of a world of military soldiers. But there are still great difficulties. Nothing can be great without great difficulties.

What is your secret, Shimon Peres?

Life is too short to be a pessimist. Being a pessimist doesn’t save you from danger. If you are an optimist, you pick up on important things as you go. Things never ended well for hateful people.

Many leaders have fought for peace and then were killed. Why is that?

It’s true but others are still alive.

What do you really think of the new government? Are you supportive of it?

I am in favour of the new government because it is fighting for peace, and I have always been more passionate about politics than government.

So it’s not true that there is friction and jealousy between you and Barak? 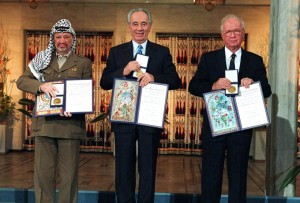 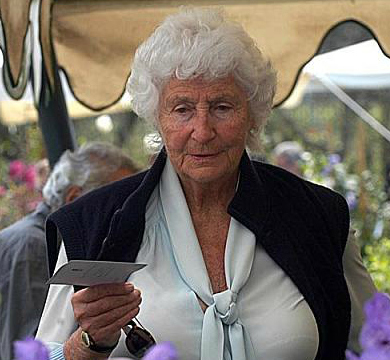 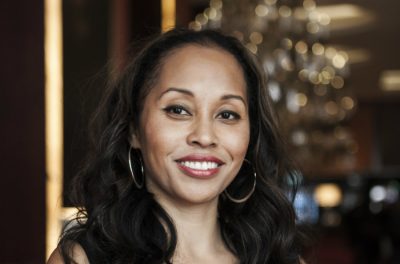