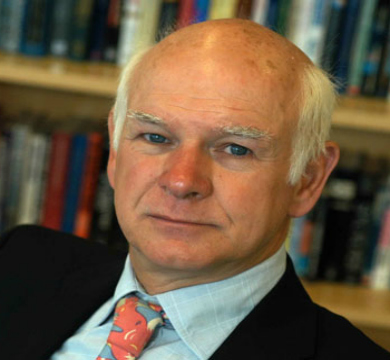 Sir Howard Davies is Chairman-designate of the Royal Bank of Scotland. He was appointed Chairman of the Board of the Phoenix Group in 2012. He is also a Professor of Practice at the French School of Political Science in Paris, Sciences Po. In 2015 he becomes the new Chairman of the London Library.

What is your principal job? 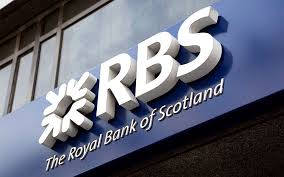 What do you teach at Sciences Po?

I teach a course on global financial regulation, about financial markets since the financial crisis, and then I teach another course about central banks, which covers the role of central banks and the politics of central banking. I teach one course in the autumn term, and one in the spring term. 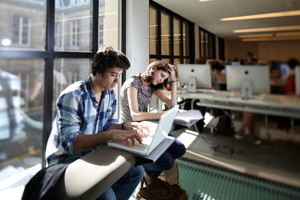 What is your involvement with cultural institutions?

I chair the finances of the National Theatre but I am stopping in order to become chairman of the London Library in November. I have always kept one cultural engagement. I have a slightly unusual portfolio of corporate, academic and cultural life. 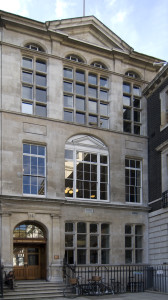 How are you able to combine these three different lives?

I suppose I have been lucky enough to maintain sufficient interest in each area to keep them all going. It’s a luxury. Often it’s not possible to run these things together and I think they feed off each other in a healthy and interesting way, and it keeps me alive. These days you do have to think very hard about the nature of the markets, but also the public accountability and the political acceptability of what you do in a bank. Teaching about that keeps me in touch with academic thinking and regulatory and central bank thinking.

How do you organise your life?

I work hard, from 8 in the morning till 11 at night. I am very active, and I find it possible to work hard as long as you are doing a variety of things that you find interesting and challenging. My combination of activities means I am never bored, and they feed off each other. You meet people in your business life who are interested in the Library and supporting it. 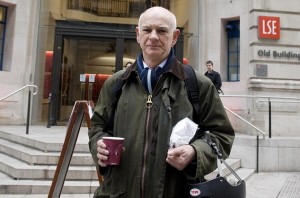 And this coming autumn are you changing your primary job?

It’s a big challenge. What is your role?

How is the financial situation in the world today?

There is a huge amount of liquidity looking for a return because of financial repression. If you hold your money in the bank at the moment you get nothing. There is a lot of money looking for a home for investment, so in some ways it’s quite easy to sell shares, to raise bond finance, as long as you have a reasonable project. The stock market is buoyant and liquidity is loose and the central banks are still buying up assets and holding down interest rates below their normal level, and so at the moment financial conditions are quite easy. There are threats on the horizon.

The Chinese want to slow their economy down to a growth rate of 7%. The nervousness in the markets is that they may slow it down too much, and that would be a problem and have an impact on commodity producers. It is affecting Australia, Indonesia and Brazil, exporters of commodities, not so much the UK and the US. That is one threat on the horizon. 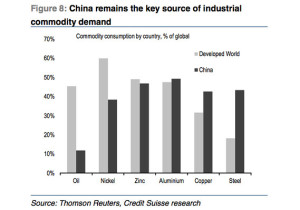 What about interest rates?

The second threat is the impact of increases of interest rates in the USA, possibly in the UK, not in continental Europe yet.

Does this worry you?

I don’t particularly fear it because it’s so well signalled, the least surprising rise in interest rates there has ever been. The Fed has been talking about it for years. So as long as they increase gradually I think it’s a good thing. A quarter of a per cent would stop the stock market going up perhaps, and helpfully stop the risk of a boom. Stock prices are pretty high, partly because people want a return on their money and are getting no return if they hold their money in the bank. So other assets are rising in price.

And what about real estate?

Property will go up less if interest rates rise, and the market will flatten off and that will be a good thing as prices are still going up by 10 to 15% a year in London, which is too high, and makes it very difficult for young people to buy property. It’s an artificial market. 6 or 7 years of zero interest rates is very unusual, and we don’t really understand the impact of that. But we are starting to see the downsides in the form of booming stock and booming property markets, as you can’t get any return from putting your money in the bank.

What is your biggest concern?

Is this growth going to last?

The forecasts are reasonably optimistic. Because of the problems in Europe the pound is rising against the Euro, this is having an effect on our exports to Europe and on tourism, but generally the mood here is quite positive. Unemployment continues to fall, and I expect our economy to carry on growing at 2 -3 % a year for the next couple of years.

What will be the outcome of the UK referendum on whether or not to stay in the EU?

The government wants to achieve some kind of renegotiation, and then to recommend a vote in favour of staying in. The likelihood is that we will stay in. Foreign institutions are a bit nervous about it, but the opinion polls are quite favourable at the moment to staying in the EU. 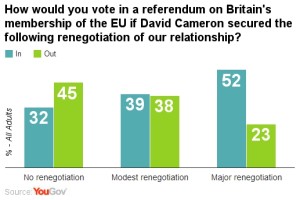 What is the biggest problem that Europe has?

The division between creditor and debtor countries. The Euro Zone is not complete, it is a political project which does not yet have the political glue to make it work effectively. It needs fiscal policy: a lender of last resort for banks, some fiscal union, a common deposit protection scheme for the banks. You need a whole variety of mechanisms which will make the single currency zone work more effectively. You have a growing division between creditors and debtors.

The Germans, the Dutch and the Fins, the Austrians are the creditors, the debtors are the Greeks, Italians, the Spaniards and the Portuguese. As for the French, probably northern France is a creditor, southern France a debtor.

Do you think that the Germans have too much power within the EU?

The problem is that Germany is not prepared to exercise its power, the Germans are simply not prepared to act militarily. If Germany runs foreign policy and has the view never to intervene that’s a problem. If the Russians decide to take over Estonia or Lithuania we have to intervene, otherwise what’s the point of Europe? Germans are prisoners of their past, and in foreign affairs it’s a problem of German weakness, not of power. They are the dominant country, but not willing to act. Europe has to be willing to act. 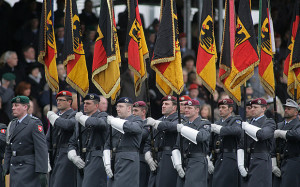 What about the US?

The US economy I am optimistic about, it has recovered well and remains remarkably innovative and dynamic, generating employment at a healthy rate. I think the Dollar is likely to strengthen. The pound has gone up with the dollar.

Will this be a problem for America?

America and the Euro Zone are both continental economies, the proportion of exports is relatively low. The biggest trading partners the Euro Zone has is other Euro Zone countries. In America exports outside the US are not so large. In Britain a larger proportion of our economy is external trade. The Dollar rising does not have a huge effect on the US economy because the proportion of external trade is smaller, and also they get benefits. Commodities are cheaper, as are their imports of raw materials. The US is not so sensitive to exchange rate variations as the UK. 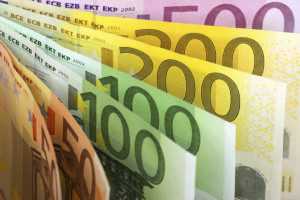 And what about oil? 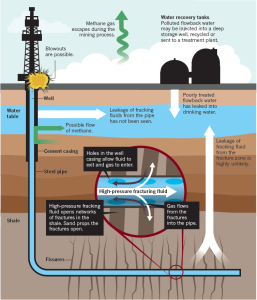 And the emerging countries?

Interestingly the emerging market currencies are falling sharply, largely attributable to commodity price falls. So they are becoming more competitive as manufacturers, but their economies are growing less because of their reduced income from commodity exports. Overall emerging markets are still growing. South East Asia and India are still growing quite healthily. They have to tighten their belts somewhat as they no longer benefit from a commodity boom. 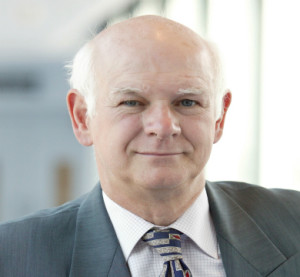 Ultimately can we say that you are optimistic?

Yes, I have often have been pessimistic, very pessimistic as the crisis began and 2 or 3 years later I thought we faced disaster, and I was right for a while, but now I think a lot of the fears are overdone. Even in Europe, where we have had this Greek crisis the financial markets barely reacted, even though it looked quite possible that the country will fall out of the Euro Zone. People now seem to have understood that Greece is Greece. The markets are more mature about these problems, and the underlying tone of the world economy is still fairly positive.

Is it more of a challenge to be a banker or an insurer?

I have been both. I was on the board of Morgan Stanley till two months ago, but the particular problems of RBS are that this is still a bank in intensive care. It was the world’s largest bank briefly in 2008. Just at the wrong time, when you didn’t want to be the world’s largest bank. RBS has had a particularly difficult time. It had the biggest loss of any company in the UK in 2009. The bank still has to be reconfigured in a quite fundamental way. 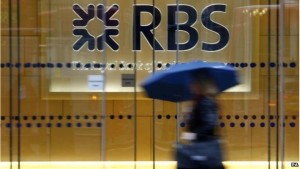 The UK government has begun its sell-off of shares in part-nationalised lender Royal Bank of Scotland, raising £2.1bn, a third below the price it paid. BBC.

You are an intellectual and a man of culture, and in November you become Chairman of the London Library?

I have been a member of the London Library for decades, and my wife has also been a member for years and uses it more than I do. I am an old fashioned romantic about books, an enemy of the Kindle. I collect books on cricket, and Wyndham Lewis and John Cowper Powys, these are my rather eccentric three interests. The London Library is a great institution which needs to be nurtured. There is a lot of competition for philanthropy in London as government subsidy reduces, and trying to help the London Library to continue to prosper is a great cause. I am looking forward to it. 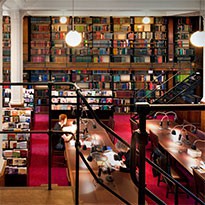 The Reading Room at the London Library

Do you have any hobbies?

My hobbies are playing cricket, which I still do regularly, and I sail in Greece, and I read novels endlessly. I chaired the Booker Prize in 2007, I have always retained an interest in fiction. One day I shall write a novel, when I retire. I am definitely not retired yet. 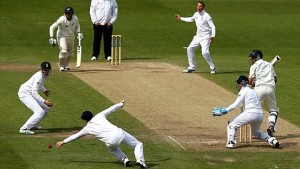 Video: Inside The London Library 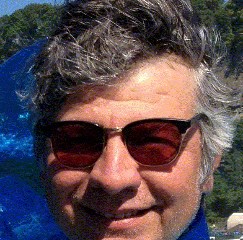 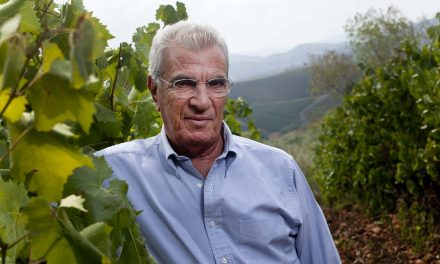 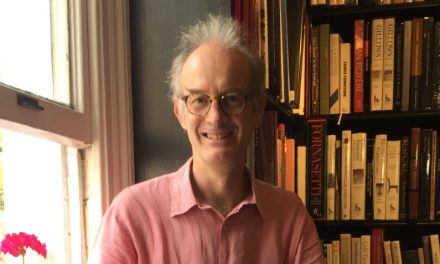