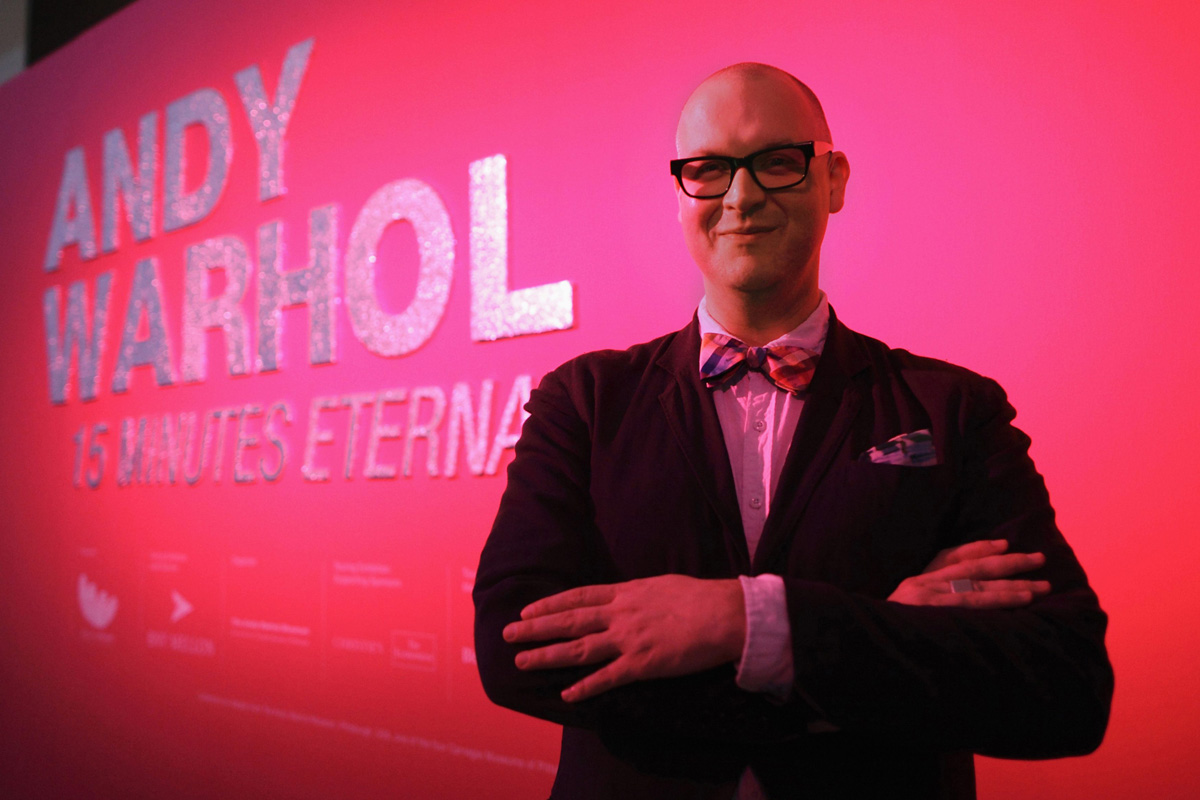 Eric C. Shiner is Director of The Andy Warhol Museum in Pittsburgh.

I meet Eric Shiner on a sunny Sunday morning in early March, a tall man, fit, very focussed and polite. He sits next to Bob Colacello, (previously interviewed in La Stampa), the first editor of Interview Magazine and co-author of The Philosophy of Andy Warhol. Bob is the author of Holy Terror: Andy Warhol Close Up, recently republished with a new introduction.  We are in the Bruce High Quality Foundation University, where there are lectures and encounters with students (the Bruce High Quality goes beyond Warhol, they are original artists) about which Bob Colacello will tell the stories. 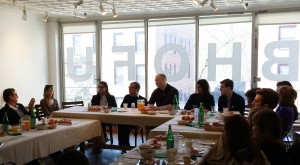 In May 2014 it will be the twentieth anniversary of the Warhol Museum.  Pittsburgh is the city of birth and youth of Andy. The Museum is a twelve million dollar project; 88,000 square feet in a 1911 Beaux Arts warehouse, elegantly recycled by Richard Gluckman, the contemporary art world’s favorite minimalist architect. The Warhol Foundation gave the Museum 3,000 of Andy’s works and his archives; the Dia Center for the Arts gave sixty early paintings and eighty drawings. Pittsburgh’s Carnegie Institute oversees the Museum. For the occasion there will be many celebrations.

Eric, what kind of museum is The Warhol?

Andy died in 1987 and the Museum was conceived and realized in his hometown of Pittsburgh in seven years, which is incredibly fast. We opened in May 1994. We continue to create and innovate.  We do not want to be a memorial, a mausoleum; instead we focus on keeping the Museum alive. Seventy per cent of our visitors come from outside.  The Museum does not have to look like a tomb.

But Bob Colacello says, “It is the Pharoah’s tomb of Pop Art. They called Andy the Pope of Pop Art. It is a great monument to Andy and his art and every art student should take a pilgrimage to Pittsburgh.”

Eric, for how long have you been the Director of the Museum?

Two and a half years.

But you studied Japanese art?

Yes, I studied Art History and Japanese art at Pittsburgh University.  I could speak Japanese and moved to Japan for a while; and when I came back I volunteered at the Carnegie Museum of Pittsburgh.  But when they asked me if I would like to take a job at the newborn Warhol Museum I thought that it was a great opportunity for me, and I started working as curator.

Could you describe the Museum?

It is the single largest collection: nine hundred paintings, thousands of drawings, pictures, clothes, personal objects, videos, films. There are lots of commissioned portraits and drawings from 1950. (We don’t have a large Marilyn and we wish to have donations!) 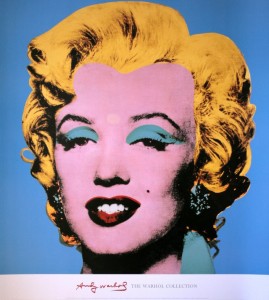 We move our paintings all the time and lend them out for shows. For instance at the moment we have an exhibition in Azerbaijan, in Baku.  And then there is a large exhibition in Japan that will go around the most important Asian cities. Also, something else very important, which is that Technicolor is going to digitize all Warhol’s films.

“I am sure Andy would have loved the Museum because it looks like a Factory and you know that his studio in Union Square was The Factory!” interjects Diane Von Fürstenberg (previously interviewed in La Stampa).

Andy Warhol did not waste anything and from 1974 until 1987 he used to put everything into boxes that he called Time Capsules?

Yes, we have more than six hundred of his boxes. He used to save all his invitations, press clippings, presents he received.

He had a strange relationship with money?

Never forget that he came from a very poor family…  his father was a coal miner.  He was in constant fear of being poor. Nureyev was like him, he feared to lose it all. That is why he was storing everything. When we started to catalogue his objects we calculated they were around 100,000.

He was generous and invited many people for dinner, always in restaurants because they were tax deductible. He loved kids and dogs, he loved to help new talents. For instance, like many others, the photographer Mario Testino was given his first job by Warhol; and people like Bruce Weber and Mapplethorpe had a page in Interview and were paid $25.”

What about other artists?

He liked American art and when he was himself not yet an artist he was a client of the galleries and bought a Jasper Jones.  Then later he started to work with other artists, like Francesco Clemente and mainly Jean Michel Basquiat.

“When Andy and Jean Michel were working together it was a wonderful moment,” says Vincent Fremont, a longtime friend of Andy and President of The Andy Warhol Foundation. “He never hung one of his own paintings in his house.  He owned some Lichtensteins, Twombly, Basquiat; and, before that, Magritte and Ernst.” 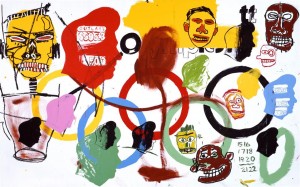 Success was hard to come by for Warhol?

Yes, he was a fashion illustrator for many years and that made his success difficult to come.  We just have to think that MOMA refused to hang his paintings when he was alive. But many people were jealous, because he was very curious, and one of the reasons why his art became global is because he was close to his time. He had the pulse of the American Culture of the moment, more than anyone else, and he was criticized for that. But then he became huge. He was such an important artist that he needed a Museum dedicated to him.

Is it true that you are going to open a new branch in New York?

Yes, we are exploring the idea of opening a branch in downtown New York and we hope to make an announcement in May.  And then, as we did in Pittsburgh, we have to realize it very quickly – and we could open in 2017! 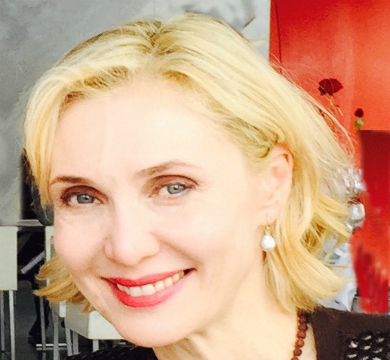 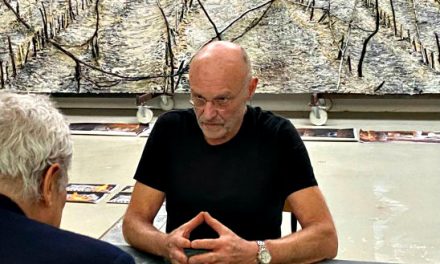 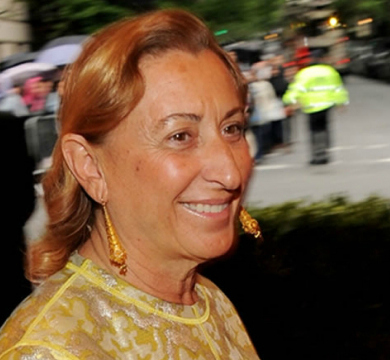 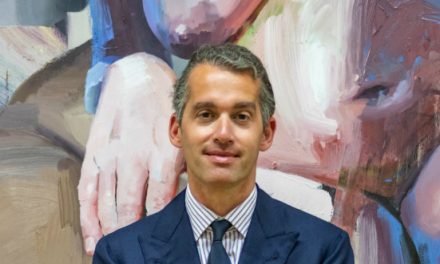